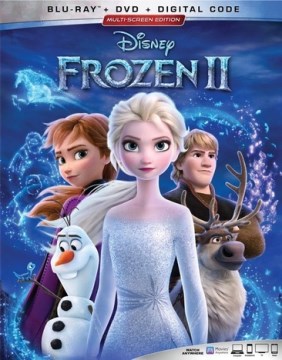 Summary: Why was Elsa born with magical powers? The answer is calling her and threatening her kingdom. Together with Anna, Kristoff, Olaf, and Sven, she'll set out on a dangerous but remarkable journey. In the first film, Elsa feared her powers were too much for the world. Now she must hope they are enough.

After requesting (March 2019) this library DVD movie (Frozen 2) and waiting for 1 1/2 years, to be able to picked from library. WHAT A DISAPPOINTMENT AND WASTE OF A DVD 1hr 43min MOVIE.
"DO NOT JUST FOCUS" on those 5-STARS REVIEWS "ONLY", from other library users who have seen this DVD movie before me.
The original 2013 (FROZEN movie) was one of the better movies that was published by "Walt Disney Studios Entertainment". Normally, watching DISNEY movies for 35 years - that the Disney sequel remake of a movie with same name, is an improvement over the predecessor. THIS REMAKE (FROZEN 2) is definitively not like that.
/
If you read more of the 3-STARS REVIEWS, from other library users who ACTUALLY SEEN this DVD movie; it truly explains that (FROZEN 2) is 90% musical songs. Unlike in 2013 (FROZEN movie) there was a story-line to follow that made-sense; YOU can ACTUALLY see that this Disney (FROZEN 2) was created in a RUSH PRODUCTION. 1) The On-Screen characters were recorded separately from the sound recording (THEY "DO NOT MATCH" VOICE with ACTRESS), 2) Each time THIS MOVIE changes background scenery, it does not match with Elsa or Anna or Olaf. 3) In original 2013 (FROZEN movie), you had a understanding of when the movie was ending in Arendale. 2019 (FROZEN 2) just continues filming as if leaving the movie recording equipment running and everyone leaving that room.
/
As with the BETTER LIBRARY user (REVIEWS) ""APR 01, 2020 review by sjpl_javier"" clarifying what he actually seen while he viewed (FROZEN 2) , each of THESE OTHER 5-STARS REVIEWS of (FROZEN 2), just give GENERAL INFORMATION saying:
> Really good movie, > I enjoyed Frozen 2 better than the first one, I personally loved this one better than the Frozen 1, > (I actually really liked this movie. I hated the first one, but found myself laughing and enjoying the music to Frozen II), > This is the best !!!!, > Overall - I loved watching Frozen II - I really enjoyed myself, > I LOVED THIS MOVIE, > ...kids will love it !
"WAS MOSTLY WRITTEN FROM A TEENAGER, YOUNG ADULT perspectives" and therefore giving next library user waiting to PICK-UP (FROZEN 2) DVD from LIBRARY - a WRONG UNDERSTANDING of what an awful Disney sequel, this is.
Also, the SNEAK PEAKS - HAVE **"NO SOUND"** :-((
Based only on my personal viewing of (FROZEN 2) DVD MOVIE on my computer 24" monitor, Less than 3-STARS RATING and giving it my (2-STARS REVIEW RATING/Opinion) - without no comments about those previous library users reviews, who liked Frozen 2 (ABOVE).

This movie was really good, I think I liked it better than the first one! Olaf's so funny lol, and I keep finding myself singing Show Yourself (best song!) hehe

What I think is that Elsa should have stayed home instead of being lured by a voice she thinks is good. You aren't supposed to rely on your feelings especially when you're trying to rule over a kingdom. Elsa is supposed to think of her people first instead of herself. What do you think would've happened if some enemy decided to attack her kingdom? IT WOULD'VE PERISHED!
She left her kingdom unprotected.

ok...this one surprised me. in a good way that is, i came in not really knowing what to expect but this is a really good movie actully. i don't know why people hate on it..?

Honestly, I enjoyed Frozen 2 better than the first one. The story was more thought through and was less predictable. I find the songs aren't as catchy as the first movie, but you'll still get at least one stuck in your head.

I personally loved this one better than the Frozen 1!

As an adult, I really disliked the "straight to DVD" feel of this movie. The movie seems to have a song every 5 minutes. Children will enjoy seeing their characters return and some of the situations are funny and some are tragic.

The story also makes less sense than other Disney stories.

I actually really liked this movie. I hated the first one, but found myself laughing and enjoying the music to Frozen II. It seemed a little more serious than the first one and the music wasn’t as intense (which I appreciate because I am not a fan of musicals). It’s a great movie about family and figuring out who you are. Definitely give it a watch if you enjoy Disney films!

If you liked "Frozen," you will like "Frozen II." It feels almost identical, and was undoubtedly made the same way, by committee. As soon as I heard the first phrase or two of "Into the Unknown" my immediate reaction was "somebody listened to "Let it Go" too many times.

Watched uncritically, it is a beautiful piece of eye candy. Like "Frozen" before it, the plot has almost no meaning, and is much of the "one darned thing after another" variety. However, accepted uncritically, the dialogue is possibly more insidious. It is the most appalling mashup of myth concepts, "pagan" and primitive culture ideas, and (for some reason) homeopathy. (I am unavoidably reminded of the creation of "Irish Spring" soap, which provided nothing new in terms of cleansing agents, but was a product of the marketing department and ideas from focus groups.)

The rare Disney sequel that's just as good, if not better than the original. The songs aren't quite as catchy, but the animation is even more impressive to watch in 2020 than watching Frozen when it came out.

2020lib thinks this title is suitable for 21 years and over

white_elephant_475 thinks this title is suitable for 1 years and under

nancyhsu514 thinks this title is suitable for 99 years and under

blue_coyote_900 thinks this title is suitable for 4 years and over

white_wolf_1777 thinks this title is suitable for All Ages

violetjelaine thinks this title is suitable for All Ages

“ALL ONE CAN DO IS THE NEXT RIGHT THING.”

Many quotes in IMDb, thanks to its contributors:

However, some of the good ones are in the song lyrics such as "The Next Right Thing" by Kristen Bell:
I've seen dark before, but not like this
This is cold, this is empty, this is numb
The life I knew is over, the lights are out
Hello, darkness, I'm ready to succumb
I follow you around, I always have
But you've gone to a place I cannot find
This grief has a gravity, it pulls me down
But a tiny voice whispers in my mind
You are lost, hope is gone
But you must go on
And do the next right thing
...
Just do the next right thing
Take a step, step again
It is all that I can to do
The next right thing
...

Other: This ENTIRE Disney 2019 movie is a stupid MUSICAL - There is no correlation to the original storytelling of ORIGINAL 2013 movie version (FROZEN)...