Saved Searches Advanced Search
All library locations will remain closed through at least May 2. Please keep all materials. No fees will be charged to your account.
Print 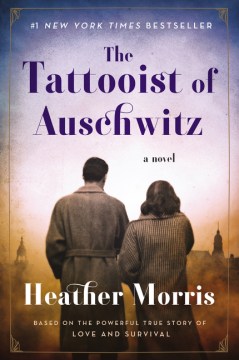 The Tattooist of Auschwitz

"In April 1942, Lale Sokolov, a Slovakian Jew, is forcibly transported to the concentration camps at Auschwitz-Birkenau. When his captors discover that he speaks several languages, he is put to work as a Tätowierer (the German word for tattooist), tasked with permanently marking his fellow prisoners. Imprisoned for more than two and a half years, Lale witnesses horrific atrocities and barbarism--but also incredible acts of bravery and compassion. Risking his own life, he uses his privileged position to exchange jewels and money from murdered Jews for food to keep his fellow prisoners alive. One day in July 1942, Lale, prisoner 32407, comforts a trembling young woman waiting in line to have the number 34902 tattooed onto her arm. Her name is Gita, and in that first encounter, Lale vows to somehow survive the camp and marry her"--Dust jacket flap.
Publisher: New York, NY :, Harper, an imprint of HarperCollinsPublishers,, [2018]
©2018

Characteristics: 262, 11 pages : illustrations, map ; 24 cm.
Summary: "In April 1942, Lale Sokolov, a Slovakian Jew, is forcibly transported to the concentration camps at Auschwitz-Birkenau. When his captors discover that he speaks several languages, he is put to work as a Tätowierer (the German word for tattooist), tasked with permanently marking his fellow prisoners. Imprisoned for more than two and a half years, Lale witnesses horrific atrocities and barbarism--but also incredible acts of bravery and compassion. Risking his own life, he uses his privileged position to exchange jewels and money from murdered Jews for food to keep his fellow prisoners alive. One day in July 1942, Lale, prisoner 32407, comforts a trembling young woman waiting in line to have the number 34902 tattooed onto her arm. Her name is Gita, and in that first encounter, Lale vows to somehow survive the camp and marry her"--Dust jacket flap.

This book is a view of the horrors, albeit not a diary, but still conveyed by a survivor, who was likely 1 in 10,000. As much as I want to believe "romance" survived in the camp, this book sure pushes it and makes it a page turner. Another lens to see what lengths it took to survive this unimaginable place in all its filth and toil...may it not be remembered and not repeated.

Read it in one day, and I can't remember the last time a book compelled me to do that.. It is poignant, and unforgettable. Why would anyone criticize Lale for "working for" the Nazis? That's what every interred victim was doing - to do otherwise would have meant death, possibly even torture. They didn't have a choice if they wanted a chance at survival! No one can really predict their own behavior in life or death circumstances, particularly one as inhumane and barbaric as this. Please don't blame the victims.

Do yourself a favor, stop reading your current book. Start reading THE TATTOOIST OF AUSCHWITZ by HEATHER MORRIS. This book should be required reading in all literature and history classes at the high school level and above. This is a love story set in, of all places, a Nazi concentration camp during WWII. Once started, you will not be able to put it down. It brought tears to my eyes many times. At other points, I wanted to cheer out loud.

Shortly after his arrival at Auschwitz, Lale was made assistant “Tattooist” eventually becoming a lead tattooist. His function was to put the tattoo numbers on the arms of new prisoners. He tried to do that as humanely as possible. As “Tattooist”, he was allowed to have a private room and slightly better and more food. He also had the ability to travel within the camp grounds. That is how he met and fell in love with Gita.

Lale was a hero. Through his “privileged” status, he was able to steal food for his friends, especially Gita. He was able to get medicine for Gita when she contracted typhus. He saved the lives of a few of his fellow prisoners. At one point, Lale is beaten by a guard whom he had helped. The guard did not beat Lale as severely as he could have.

The book is what today is classified as Creative Non-fiction, factual but with created dialogue. The presentation is flawless. It shows that happiness is possible under the worst possible conditions. Lale always promised Gita that they would survive and get married. Mazel Tov!

I really loved reading this book. I have an Aunt who survived Auschwitz so I tend to stray away from these types of books because they never truly express what life was really like for these people and what they would do to survive. This book was an easy read and a beautiful story about survival, love and strength. I did however, find the ending very rushed as if they were trying to just finish off the book. I felt that this book really captured what days and nights were really like while still making it a bearable read. I would definitely recommend this book!

having pushed forward, however reluctantly, on the strength of favourable notices, to page 54 only, I finally put the book down for its being not only improbable, but also poorly written, the horrors of Auschwitz turned into a pulpy "true romance" - yech

This is a simple, quick read told in a straightforward fashion. I came away with a sense that the real Lali Sokolov was a bright, quick-witted man with a huge, generous heart. He did what he needed to do in order to survive, just as anyone would do when facing possible death each day. How fortunate we are that he finally, as an old man, told his story as he remembered it some 60 years later. I have no patience for those who nit-pick the details of his 3 years of surviving Auschwitz – this is his narrative, his truth, as he remembered it and shared the details with the author. A worthwhile read.

Ultimately, I could not find much to recommend in this book. It's meant to be a tale of survival. However, I cannot get past the fact that the main character survived by working with the Nazis. Furthermore, he steals from the personal belongings confiscated by Nazi officers from their victim to bribe guards and buy favors and special treatment for himself and woman he loves. I'm sure it's hard to find morality, even among the prisoners, in a concentration camp, but the tattooist's only morality seems to be that he and his girlfriend must survive.

Great story. Read it in a day.

The author, Heather Morris, has portrayed strong emotions in the main characters. This book contains romance and action which are two things I enjoy to read in a novel. It is also historical as it talks about the Second World War as well as including the significance of the Auschwitz Concentration Camps during that war. In the first couple of chapters, we are powerfully introduced to a very important man named Lale. As I continued to read the story, I got more pulled in as soon as a new character joins the story. This novel was very enjoyable and I also learned more about World War II that I did not know about which was very interesting. I would rate this novel a nine out of ten. @YoumnaLovesBooks of the Teen Review Board at the Hamilton Public Library

Last year, I found myself getting a bit burnt out on WWI and WWII historical fiction novels. I found that many were following a formula of based on true stories of women, lighter romance and/or secret spies. A few I read were amazing, but on the whole I have been meh. Some I haven't been able to get through, some I think I might like once I take a break and have put to the side, and some have been like The Tattooist of Auschwitz. It is engaging, and because it is a true story it is plausible, and an "easy read" (not on subject matter, but rather how it is written). I continued to read this novel, rather than putting it aside, because this was the best it was going to be for me, I am afraid. Maybe I went into this with too high of expectations - as most people loved this book. I did find the tattooing of prisoners interesting, as I have not heard too much about that in my studies. I will be reading Cilka's Journey as the synopsis sounds really intriguing.

"They are holding something that is absolutely forbidden in Auschwitz. These items, so dangerous that their mere possession is a death sentence, cannot be fired, nor do they have a sharp point, a blade, or a heavy end. These items, which the relentless guards of the Reich fear so much, are nothing more than books: old, unbound, with missing pages, and in tatters."

...choosing to live is an act of defiance, a form of heroism.

trreadaholic thinks this title is suitable for 14 years and over