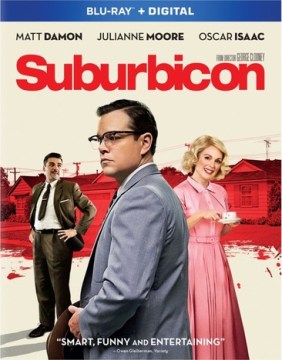 Summary: A peaceful, idyllic suburban community with affordable homes and manicured lawns, the perfect place to raise a family, and in the summer of 1959, the Lodge family is doing just that. The tranquil surface masks a disturbing reality, as husband and father Gardner Lodge must navigate the town's dark underbelly of betrayal, deceit, and violence.

dark,cruel,predictable and uncomfortable to watch. not funny or entertaining. dont bother

The script for this film is so confused, and the dramatic payoff so meagre that I can dismiss it as just another Coen brothers failure. Merging two film styles--documentary and noir fiction--was never going to work, and the people who made it should have realized that.
Having said that, there is some good acting from Damon and the black actress playing Mrs Mayers. Oscar Isaac should stay away from playing sleazy characters; he doesn't do well here.

This is avery very dark comedy concerning spousal murder & a highly publicized real life block busting event in segreatated America of the 1950s. It is not for the laugh a minute crowd. If shades of gray are not your colour then pass on Suburbicon. I liked it. It is not family humor. For mature audiences, in my opinion.

Matt Damon starring, George Clooney directing, and a Coen brothers screenplay. What could be better? What could go wrong? Lots, it seems. A clever idea with lots of Coen brothers weirdness but there are two distinct movies here and neither really have much to do with each other except that the both happen in the same suburb and ultimately reveals just who the nice people are in all this insanity. Not the best film from any of these big names. It's strictly okay.

My kind of movie --a typical Cohen brothers movie of a murder gone wrong..lots of good twists in plot and dark humor....very entertaining script...if you liked FARGO,,you will like this.

A suburban murder caper with a surprise social commentary thrown in. Although the venom may seem excessive, it is very accurate - see the special features for a fuller picture of the history of Levittown PA, one example of many. It is not apparent from the cover, but this is a timely and worthwhile view for 'Black' History Month, focusing on the whites that create the racism. Read the book "White Rage" by Carol Anderson for a more in-depth history of this phenomenon.

I watched this movie because I'm a Coen Brothers fan. I hated it. Then, I was explaining why I hated it so much to a fellow Coen Brothers fan and it started to hit me how all the pieces fit together to make a pretty decent movie. It's not their best work (I read that the Coen Brothers original screenplay was quite different), but it has grown on me. I would recommend a viewing.

This might have been a good movie to some, but the content and plot were so repulsive that I gagged. America at its absolute worst. Perhaps if we didn't have Donald Trump and Doug Ford to remind us that this is possible ....

Cohen brothers stamp all over it. Well done!

Sexual Content: A sexual scene, no nudity is shown though.

Violence: Some violence and bloody images.

You have to make decisions. Decisions like what's best for the family. Who's being helpful. Who's a liability.
===
Yes, it all boils down to one word, coincidence. That happens in the opera a lot.
===
The whole trouble with this integration business is that, in the end, it probably will end up with mixing socially. And you will have... Well, I think their aim is mixed marriages and becoming equal with the whites. But the only way they're gonna do that is by education and by bettering themselves, not by pushing in the way they have here.
===
Thank god it wasn't the Schvartzes that just moved in.
-Excuse me?
Isn't that what you Jews call 'em? Schvartzes?
-I'm an Episcopalian.
Really? I thought you were Jewish.
-Why?
Because of your last name.
-Lodge?
Sounded Jewish.
-I'm an Episcopalian.