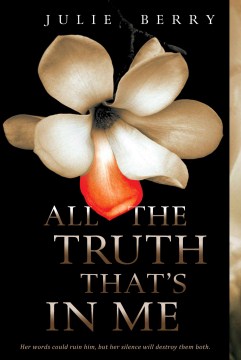 All the Truth That's in Me

Summary: "Judith can't speak. But when her close-knit community of Roswell Station is attacked by enemies, Judith is forced to choose: continue to live in silence, or recover her voice"--Provided by publisher.

Books like these are rare and when you find them you will change as a person. Judith, the narrator, basically is tell the story like an open letter, in 2nd person. I'm going to use some words from a review on the book. A voice, achingly raw, makes this novel so unique. It was a bit confusing at first, but you start understanding as time goes on. Though I loved this book, I can't see a lot of people reading it. A lot of my friends wouldn't have the patience for this book. Hell, I nearly gave up until my best friend told me she had read it. If you give this book the patience it needs for Judith to open up, you will not be disappointed.

Though the actual characters were kind of bland, you can see that wasn't the main focus. The main focus is for Judith to gain the courage to speak up and stand up for her self. She goes through so much and you will fall in love with her strength and beauty, on the outside and inside.

Wow! That was an abrupt ending!
This was a good read. It is a mystery of sorts and keeps you wondering what the villagers and Judith are hiding. The villagers and Judith’s own mother are cruel and insensitive beings who believe they are following moral law, but are very non Christian-like in their words and actions.

This book is strange, hard to get into, and starts slowly. It’s hard to get a sense of the time period from the community which is ultra conservative and religious, and they blame Judith as the victim, starting with her mother on the day she returned. The townspeople seem to be Puritans, based on a number of things that are said and implied. Or some other religious sect which believe among other things in the simplicity of life. The are some really dark moments which make it hard for me to understand the Young Adult rating. There are some very interesting discussion prompts at the end of the story.

Mysterious and gripping, Julie Berry’s new novel is hushed thriller with a shocking secret at its core. Judith’s life is split before and after the incident that took her voice and her place among her community. Unable to give voice to the truths she knows, Judith struggles to save her town when an outside threat causes old secretes to resurface and strange disturbances to occur. Berry gives Judith’s silence a strong voice that reverberates with questions as she navigates her past and her future. Packing a similar punch to Laurie Halse Anderson’s Speak but with a lingering creepiness that sets it apart, All the Truth That’s in Me is a fresh story with a twist to keep readers until the very end.

This book really intrigued me, but it was sometimes confusing. Also, not for the faint of heart.

NYPL Staff Pick
Judith was kidnapped and held captive for two years, but she can't tell anyone else in her town what really happened.

NYPL Staff Picks
Judith was kidnapped and held captive for two years, but she can't tell anyone else in her town what really happened.
- Andrea Lipinski

When I first started this book I was a little confused. It is told by the victim and goes back and forth from now to the past. It is a good book and i enjoyed reading it.

Sometimes I find myself surprised by books that get honors, and this book (a Best Fiction For Young Adults title) surprised me - because it's not very good. The pacing was odd, the characters' motivations sometimes inscrutable, and the setting not well defined. Maybe the author should have made it a novella or short story instead of a whole novel. Also, the story was plagued by the kind of self-created misunderstandings that plague YA romantic fiction.

"It's a cold world when no one will touch you."

You might compare this to Nathaniel Hawthorne's The Scarlett Letter--particularly in terms of setting and themes--except the focus and telling are drastically different. In this tale of a female town pariah in a small, religious, tightly-knit community of settlers, it is the pariah herself who narrates her story. To everyone who knows her, Judith is meek, unobtrusive, and forever silent, as good as invisible most of the time and easily dismissible; to readers, she is a bright, observant, thoughtful, eloquent, and opinionated sharer--and sometimes withholder--of secrets. She gives her perspective immediacy by alternating between first and second person voice, telling her story to Lucas, the boy (man) she yearns after. Even so, she is a halting, hesitant storyteller still trying to find her voice, using a shotgun, scattershot approach of narrative and reflective fragments to get her thoughts across. I found her voice to be engaging, compelling, and, ultimately, perfect.

"My thoughts swirl and scatter like snowflakes on an errant wind. Will I help him make something of his life? Who will help me? Why does everyone presume that I, as damaged merchandise, forfeit any claim to happiness? That I expect nothing, have no ambitions or longings of my own? When was it agreed that my lot would be to gladly serve as a prop and a crutch for others who are whole? And what rules of economy dictate that a boy without a foot is more whole than a girl without a tongue?"

As to that setting, it's one in which hard work, conformity, and self-sacrifice are valued most. People are expected to take care of themselves, demand little of others, and contribute to the common good. And the single most important measure of contribution to the common good is one's ability to not break any rules or display any differences. Conformity is not always a choice, however; sometimes illness, injury, and calamity create differences that a person can't help. But in this setting, the cause doesn't matter. Those who don't conform are scorned and shunned.

"Darrel nods solemnly. 'That's how they think about me, too.' I heave the sled along once more. No it isn't, you selfish baby. There's no comparison. Nobody thinks you're stupid. No one ever could. But empathy is dear in my world, so I'll take it."

Four years ago, Judith disappeared without warning or explanation. Two years ago, Judith returned without warning or explanation. And without her tongue. Mute and unable to account for her absence, she is reluctantly accepted back into the community as a damaged, incapable, smirched, and undesirable person. She lives in shame and her place among them is tenuous at best. In this book, Judith gradually reveals the secrets of her past over the course of dealing with tumultuous present circumstances, with the slight hope of perhaps discovering a future. It's a moving and powerful tale.

"I don't believe in miracles, but if the need is great, a girl might make her own miracle. Even if that means enlisting the devil's help."