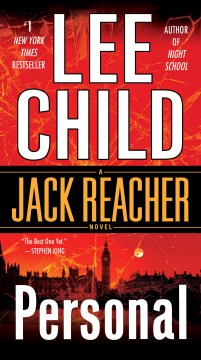 -- Praise for -- "Welcome to the relentless world of Jack Reacher and his impressive tendency to be in the wrong place at the right time. . . . Child has created an iconic character that other thriller writers try to emulate but don't come close to matching. -- "The New York Times "If you're a thriller fan and you're not reading the Reacher series, you're not a thriller fan. -- -- "--Kirkus Reviews From the Hardcover edition.
Publisher: New York : Delacorte Press, 2014.
ISBN: 9780804178761
0804178763

Characteristics: 1 online resource.
Summary: -- Praise for -- "Welcome to the relentless world of Jack Reacher and his impressive tendency to be in the wrong place at the right time. . . . Child has created an iconic character that other thriller writers try to emulate but don't come close to matching. -- "The New York Times "If you're a thriller fan and you're not reading the Reacher series, you're not a thriller fan. -- -- "--Kirkus Reviews From the Hardcover edition.

Ghost writer for this one? the writing style has definately changed, got better I believe and is continued in Make Me and I hope more future books

First-class action packed novel written with the gravitas of someone with big boy pants. The nickname Sherlock Homeless is a clue because it leads one to Doyle's assertion that when you rule out all the other alternatives, the one that remains must be the correct answer. Jack Reacher does that at the conclusion of Lee Child's excellent novel.

Another great jack Reacher kick-ass novel. Couldn't put it down!

Call me crazy. I like these Jack Reacher novels. The crimes in some of them are too awful to think about and stay with me in a bad way for days, but not in this one. I love the action and the intellectual approach to taking out the bad guys. Always page turners.

My second time to read.

Though I still enjoyed it, I found too many parts of this book were a bit stale--Lee Child staying in his own comfortable, well-worn plot grooves. And the nothing-but-a-toothbrush "luggage", and the only clothes he wears being the ones he is wearing, is all getting a bit dull. Maybe I've just read too many Jack Reacher books!!

Typical Child/Reacher; which is a good thing. He is lazy, though. He has said he doesn’t re-write or plan ahead. If he did strengthen certain sections the books would be solid throughout. I do love the disdain for our new best friend, the TOOLS. Reacher is a universal man who is his own tool (as is Child). Now that is a hero who can just be. Everything else is easy.

Another good Reacher novel. Keeps you guessing all the way through.

A formula writer with a clever premise: an ex- military police major becomes a drifter who saves many a day and sexy lady when he regularly bumps into super-villains. [He has best of both worlds: super-training and the compulsory Lone-Wolf McQuade/Lone Ranger independence.]
The upside: fairly tight writing. The downside: read one, you've read 'em all.

This one was just silly. Super snipers try to kill country-leaders at euro conference.
[Why would such a man voluntarily become one of a very short list of suspects?]

You may have my experience: enjoy the setup, and the first few times he outwits/outfights hordes of attackers, but gradually get bored with the inevitability. I'm munching my way through a list of his titles; so far i haven't managed to finish a single one. I get attracted by the tension he builds but he just can't resolve that tautness.
A bit like Andrew Vachss, but less colorful.

Close enough:
London’s population was about eight million, and the UK’s death rate was over nine per thousand per year, so on any given day a couple hundred Londoners would breathe their last. Old age, overdoses, degenerative illnesses, cancers of every kind, car wrecks, fires, accidents, suicides, heart attacks, thrombosis and strokes. All normal. Getting shot in the head by a high-power rifle, not so much.

"Really? Truth is I feel pretty good right now. I'm not the one losing men left and right. That would be you, Joey. So this is a time for common sense and mature judgment, don't you think?"

"Option one is agree right now."
He said, "What's option two?"
"I advise you to choose option one."

" ... The guy was a snake. Or worse than a snake. A snake doesn’t know it’s a snake. It can’t help itself. But that guy knew what he was choosing. Just like the other guy, yesterday, who wasn’t helping old ladies across the street, or volunteering in the library, or raising funds for Africa.”

… They wouldn’t have even have hit the right building. Plus, the round is puny. It would have barely gotten there at all. They’d have had to launch it upward about thirty degrees, like dropping a big fat curveball over the plate. Up and down, like a ballistic missile. Which is an impossible shot. And even if they had made it, the bullet would have arrived with so little energy you could have swatted it aside with a ping pong paddle. It would have bounced off Khenkin’s hair gel…