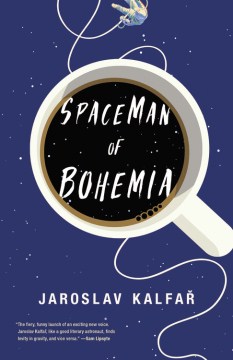 I wanted to space out reading this book, but I read it all in one sitting! The main character Jakub struggles with his father's wrongdoings as a communist informer, separation from a lover, and more. The "spider" presents an interesting view on Jakub's dilemma, which translates well into issues that a lot of us humans have. While it might get a bit intensive for the average reader, the story feels almost like a Czech story translated into English, as you have things such as the Velvet Revolution, Jan Hus, dechovka, and much much more treated as normal, common knowledge. Just looking up what a couple of these things were were very interesting and you get to know a bit more about Czech culture!
The book isn't perfect, however as I feel that after the first half more drastic things occur that don't fit in completely with the rest of the book, but the ending while not perfect does make up for it in my opinion. The author goes delves a bit too much into the sexual tones, to the point where it can be uncomfortable to read how graphic it gets. Regardless, those scenes tend to be short and the author was trying to convey the longing the protagonist had and don't ruin the whole book!

One of the best new books/authors of 2017. The story was compelling, humorous and touching.

A Czech astronaut with a troubled past is picked for a solo mission investigating a glowing cloud between Earth and Venus. His country believes, falsely, that he dies and they make him a hero and he loses his identity and family. Visualizing a spider while on the journey, he has philosophical conversations with the creature that may be real or imaginary. Less than satisfying ending to the story.

I enjoyed this book. Insights into Czech history and culture, an imaginary (or is it real) alien spider. I look forward to more books by this author.

I really enjoyed this 'literary sci-fi' novel. Very creative story arc takes on a number of issues with a deft touch and great (very European) sense of humor. It's fun for me to read books written by people who are happy in and proud of their culture without being chauvinistic about it - it gives me hope that this might be possible for Americans someday.
I will say that the ending has trouble wrapping up the package as beautifully as the package might deserve, but given the amount of amazing and ground-breaking stuff in that package, I didn't fault this young author for being unable to rise to the challenge. Highly recommended to anyone who enjoyed Hitchhiker's Guide &/or Kurt Vonnegut. I look forward to more from this writer!

Awesome first novel by an immigrant Czech writer about a professor who is sent on a one-man space mission. Filled with satire and poignancy, this sci-fi with a twist story is written in the first person with musings on culture (and food and alcohol!), family, Czechoslovakia's turbulent history, politicians, and corruption, love, loneliness, sanity and insanity, alien life forms, and ultimately what it means to be human.